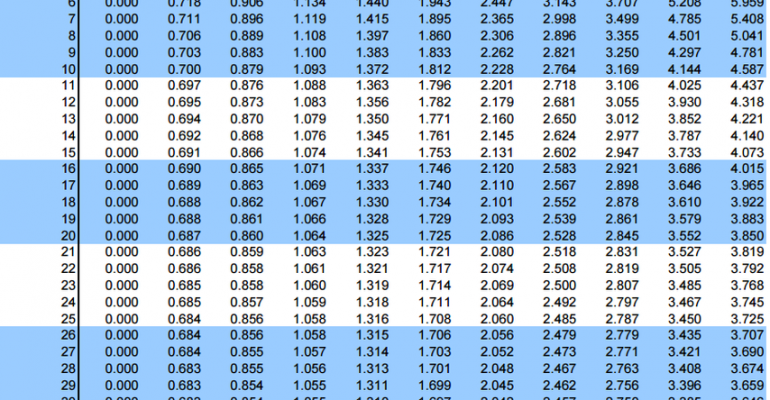 The t table or t distribution table is used in statistics when the standard deviation (σ) of a population is not known and the sample size is small, that is, n<30.

The t table is a table that shows the critical values of the t distribution and is given below:

How to use the t Table or t Distribution Table?

Using the t table is fairly simple during a t-test since you only need to know three values:

In the t-table, the first column denotes the degrees of freedom of the t-test. So, when you conduct a t-test, you can compare the test statistic from the t-test to the critical value from the t table or t distribution table.

If the test statistic is greater than the critical value found in the table, then you can reject the null hypothesis of the t-test and conclude that the results of the test are statistically significant.

You can learn more about how to use the t table to solve statistics problems in this article by Dummies.

What is the t-distribution?

When do you use the t table and the z table?

The z table is given below:

That is it for this article. If you are still confused about how to use the t table, please let us know in the comments.